Demographic challenges in post-pandemic times: an overview of the European Union’s answer to the demographic issue

During the last years, FAFCE has been alerting about the demographic challenges that every European Country has to face. Also as a consequence of the current public health and economic crisis, the EU institutions seem to finally seriously taking up the issue of demographic changes. All EU-bodies provided or are currently drafting opinions and resolutions to support the commitment of the European Commission to tackle this issue. The long-awaited European Commission Report on the Impact of Demographic changes will be published tomorrow, on the 17th of June 2020.

At the European Parliament

At the Council of the EU

On the 5th of May, the Employment and Social Policy Ministers of the European Union discussed the economic recovery plans and the demographic challenges, also in the framework of the Covid-19 pandemic. Ministers emphasised the need to implement strategies to protect the most vulnerable groups such as the elderly and children, to ensure a work-life balance for families and to keep the most affected areas attractive for younger generation. The videoconference was organised by the Croatian Presidency of the Council of the European Union, which, as reminded by the Croatian Minister for Demography, Family, Youth and Social Policy, Vesna Bedeković, “has chosen demography as one of the main priorities of its Presidency and now it is more than evident that this topic is of great importance. All Member States are confronted with some kind of demographic challenge and the COVID-19 pandemic makes all these challenges even more significant. In order to formulate appropriate solutions, now is the right time to act decisively.”

At the European Economic and Social Committee

Along the same lines, the European Economic and Social Committee (EESC) adopted on the 8th of May an Exploratory opinion on “Demographic challenges in the EU in light of economic inequalities and development disparities” (rapporteur: Stéphane Buffetaut, Group I, France). This Opinion underlined how family-oriented investments must be a priority “as they lay the foundations for the future”, suggesting that this kind of investments should not be integrated into the calculation of the public debt. Indeed, “with its share in the global population at an all-time low and another baby boom unlikely, Europe will need to take a holistic approach if it is to reverse its demographic decline, stimulating employment and embracing strong economic and social policies that can restore the confidence of its citizens in the future” (EESC Press Release, 7th of May 2020). FAFCE has expressed its support to this with a statement of its President, Vincenzo Bassi: “We hope that other EU institutions and all Member States will also have the same courage to make ambitious proposals for the future of our families. In the context of the current pandemic, this has become a real urgent matter.”

At the Committee of the Regions

The Committee of the Regions is currently drafting an Opinion on “Demographic change: proposals on measuring and tackling its negative effects in the EU regions” (rapporteur: János Ádám Karácsony, EPP, Hungary). The Draft Opinion proposes several policies options, including “creating the right conditions that would make it easier for people who want to have children to have more and earlier” and “developing the concept of the “economy of wellbeing” in the EU, whereby increasing people’s, and therefore families’, wellbeing (in terms of education, health, childcare, work-life balance, housing, mobility of transport, connectivity and culture) contributes to a virtuous economic cycle, helping sustain long-term investments into wellbeing”.

At the European Commission

On the 5th of May, Vice-President of the European Commission for Democracy and Demography, Dubravka Šuica, stated that “the Report on the impact of demographic change plays an important role in the aftermath of the corona crisis, in launching follow-up policy initiatives on ageing and on rural areas and in offering support to the long-term recovery.” 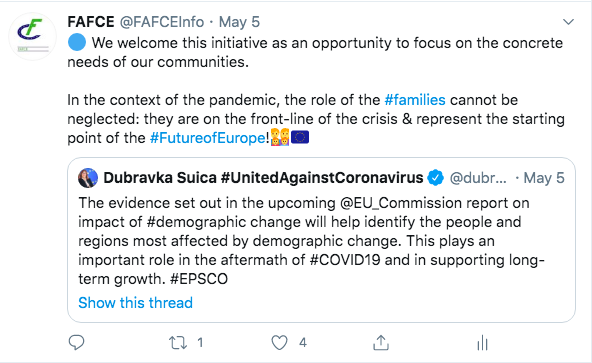 Via its social media (Twitter and Facebook), FAFCE has been communicating on the demographic challenges faced by Europe and is continuously reminding that, especially in the context of the Covid-19 pandemic, the role of the families cannot be neglected: they have been on the front-line of the crisis and represent the starting point of the future of Europe. As already recalled in a previous FAFCE Resolution “For a Demographic Spring” (Vienna, 13 April 2018), the family needs to be put “at the centre of national policies, so that the demographic winter could become a demographic spring and to shape the future of Europe”.